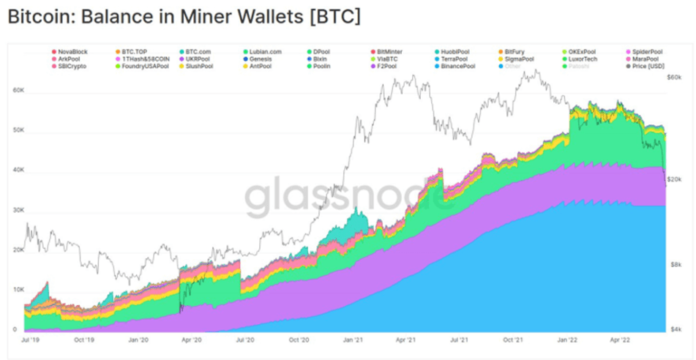 Bitcoin miners are selling their earnings to keep up with the increasing operating costs. As the electricity prices continue to increase and Bitcoin follows its downtrend, miners can’t afford to HODL anymore.

The sell-off trend started in early 2022, as the above chart demonstrates. At the time, experts commented that the miners sold their earnings because they expected Bitcoin to continue falling.

They were right. When Bitcoin hit its 18-month-lowest on June 14, mining equipment manufactured before 2019 lost profitability. At the time of writing, Bitcoin is traded for around $20,170, which is nearly the minimum profitability price for a 2021 model Antminer S19j.

Arcane Research’s data indicates that public Bitcoin miners receive around 900 Bitcoins on a daily basis. They tend to hold as much as possible and become some of the largest whales on the market.

However, the increasing energy costs and decreasing Bitcoin prices put public miners in a tough spot.

According to the numbers, public mining companies sold 30% of their Bitcoin productions during the first four months of 2022.

Digital asset broker GlobalBlock analyst Marcus Sotiriou commented on the sell-off trend and said that the main reason for the sale was:

“due to profitability decreasing with increasing electricity prices, so they are forced to liquidate some if their Bitcoin to cover operating costs.”

Another Glassnode analyst pointed out that other miners have been sellers as well. He said:

“Miners’ balances have stagnated from the 2019-21 accumulation uptrend and reversed into decline. Miners’ have spent around 9k $BTC from their treasuries last week, down from around 60k $BTC,”

The sell-off was expected

Despite the gravity of the data pointing out a sell-off trend, experts note that this is usually how miners behave during the bear markets.

Miners tend to accumulate in bull markets and sell during bear to cover interest payments or pay for higher costs. For example, in the last bear market in November 2018, miners sold a considerable amount of their coins while Bitcoin was falling.

The post Bitcoin miners are forced to sell to cover operating costs appeared first on CryptoSlate.

Margin trading vs. Futures: What are the differences?

Bitcoin: A drop in these holders could mean trouble for BTC because….

Chainlink Staking v0.1 to launch on Ethereum mainnet, details inside