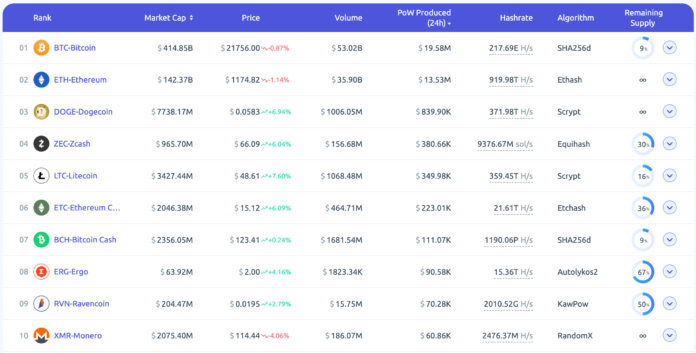 Ethereum is by far the most popular cryptocurrency for GPU miners. However, there is little time left for Ethereum in its proof-of-work state. It moves to proof-of-stake later this year when it merges with the beacon chain.

What will happen to GPU miners, and where will the hashing power end up? There are plenty of options, but will any of them be profitable following a considerable increase in hashrate?

The decline in crypto markets has made even mining Ethereum unprofitable for many miners. However, after Ethereum moves to proof-of-stake, GPU miners will no longer be able to mine Ethereum. With the price decline, the increase in energy costs, and the merge date drawing closer, the hashrate of the Ethereum network has dropped dramatically.

A reduction in hashrate causes the mining difficulty to decline, thus making GPUs more efficient. Yet, the 10% decrease has done nothing to cover the other factors driving the profitability of Ethereum mining to fall.

This information suggests that miners are turning off their machines as returns dwindle. Only miners who pay less than $0.235kwh using the latest generation of GPUs are currently able to turn a profit mining Ethereum. For instance, a mining rig made up of AMD Vega64 cards, one of the most cost-efficient GPUs during the 2021 bull run, now requires an energy cost of less than $0.18kwh to be profitable.

Therefore, the question is, what are miners doing with their GPUs as they move away from Ethereum?

Mark d’Aria from BitPro crunched the numbers regarding other altcoins and the future of GPU mining. He concluded that “it’s’ possible that GPU mining has a renaissance, and we do this all over again.” Miners cannot simply switch to another slightly less profitable coin due to the influx of hashing power that will come after proof-of-work is turned off on Ethereum. However, below is a list of the top proof-of-work cryptocurrencies contenders and their hashrates.

To understand how we calculate which of these coins could take up the mantle of the king of GPU mining, we need to understand the following formula:

d’Aria created the below table to highlight the daily income for the most popular proof-of-work coins.

Without an understanding of the total mining revenue of each coin, it may be possible to miss that “mining calculators are not showing you the relative hashpower and income of the various coins when they show you all these alternatives to ETH.” d’Aria explains the implications in a simple to understand manner,

“In [the] oversimplified base-case scenario, nothing changes between now and the merge. All crypto prices, total hashpower and block rewards stay the same. On merge day, all GPUs divert to other coins. 10 million GPUs are now left to split approximately $775,000. Average income per GPU? $0.0775.“

Further, in a more positive bull case, d’Aria calculated that even if all crypto prices doubled and only half of the miners continued, the average GPU income would still be just $0.30 per day. Ultimately, he states that,

“realistically, there’s no good outcome here for miners on merge day. A miracle needs to happen just to keep things the way they were. Winter is coming.”

The increase in hashing power distributed across the current ecosystem, at today’s prices, cannot realistically lead to profitable GPU mining for any cryptocurrency. However, all may not be lost. CryptoSlate spoke to Stefan Ristic from bitcoinminingsoftware.com, who raised another possibility.

“The post-Merge era won’t be easy on miners, but I don’t think it’s that bad. First of all, I think the role of miners is rather neglected in such articles. Back when Bitcoin wasn’t yet tradeable, it was miners who led the adoption… We can’t exclude the option that The Merge will go bad, and Ethereum falls back to PoW.”

Yet, GPU miners cannot surely rely on the merge to go badly to secure their future. Ristic used the history of Bitcoin to anticipate the increased adoption of another proof-of-work cryptocurrency.

“Miners are the strength of any PoW cryptocurrency, and if we see millions of miners starting to protect another cryptocurrency, this should logically increase that cryptocurrency adoption and that should reflect on the price as well.”

One such method was proposed by Stephen Ross, Lead Infrastructure Engineer, Republic Crypto, who said, “it’s already possible to boost mining profitability by transcoding video on the Livepeer network at the same time as mining Ethereum, and other opportunities could likely arise in the future.”

Profitability after the merge

Regardless of the math, many are still championing GPU mining post-merge. The mining company, Nicehash, suggested that “Ethereum moving to PoS will not be the end of mining. There is still plenty of interesting Proof of Work projects to which miners can direct their hashpower.” Yet, the article says very little about what impact dropping the total hashing power of the Ethereum network onto a new chain will have. Nicehash promoted Ravencoin, Flux, and Ergo as alternatives to Ethereum without considering d’Aria’s math.

d’Aria concluded his article by stating that GPU miners may have to wait a while before a profitable alternative arises. It’s important to note that BitPro buys and sells GPU and thus has a vested interest in GPU miners selling their rigs. However, the math doesn’t lie. GPU mining will have a very tough time on merge day. The profitability will undoubtedly drop to potentially unsustainable levels. Yet, miners have been the staple of the crypto industry since 2009. Ristic made a very valid point in stating that the power of a decentralized network of miners is unparalleled.

If the hashing power of Ravencoin increases by 500 times, it would be one of the most secure assets in crypto. Should the price surge by a similar multiple, Ravencoin could become the new Ethereum. The same is possible for every GPU mineable coin, so keep an eye on the hashrate of the above currencies. It could be a massively bullish signal.

The post GPU mining could eventually be profitable after Ethereum moves to proof of stake appeared first on CryptoSlate.

Will UNI rally higher after Uniswap launches NFTs on its network?