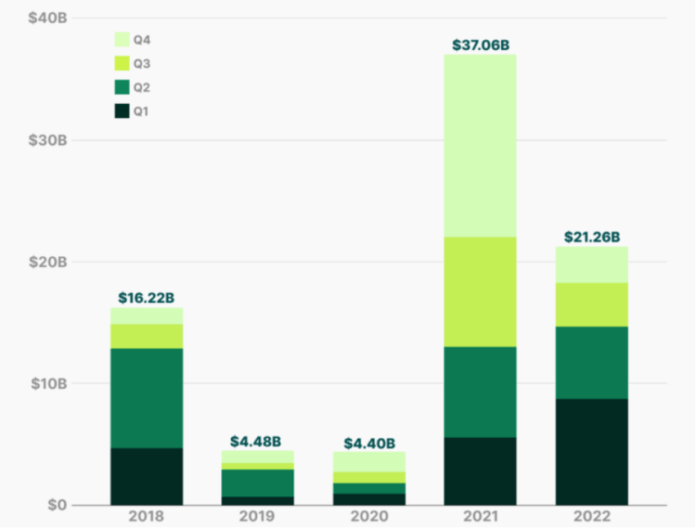 Coinspeaker
Crypto Startup Funding Down 40% in 2022 to Its Lowest

The last year of 2022 was full of major collapses and bankruptcies in the crypto space which deeply impacted investor sentiment in the market. As per the latest development, crypto startup projects secured 42.5% less funding in 2022 in comparison to the previous year 2021.

The year 2021 witnessed one of the biggest bull runs in the history of crypto. Furthermore, there was significant liquidity in the market due to the quantitative easing measures of the central bank.

But the last year of 2022 witnessed one of the major pullbacks in the crypto space leading to a major outflow of investor interest. Several companies had to halt their expansion plans with a few of them shutting down operations entirely.

As per the study by CoinGecko, crypto companies raised $21.26 billion last year, and almost half of it was secured during Q1 2022 when the sector was still in better shape. However, the market sentiment hit a new low in the second half triggered by the collapse of the Terra LUNA ecosystem. This incident alone wiped out $40 billion of investors’ money from the market. The collapse of the Terra ecosystem led to major bankruptcies of giant firms like Three Arrows Capital (3AC) and Celsius Network.

During the third quarter of 2022, the total funds raised stood at just $3.61 billion. In the last quarter, the collapse of the crypto exchange FTX was another major blow to the entire crypto industry. As a result, the crypto firms could collectively raise less than $3 billion. In comparison, the total funds raised during the 2021 crypto bull run were more than $37 billion.

Why 2022 Was Relatively Still Better

Despite the major downturn in 2022, the last year was still better than some of the previous years like 2018, 2019, and 2020. Explaining the probable reason behind it, CoinGecko explained:

“The relatively better funding performance in 2022 points to the cryptocurrency industry’s growth over the last five years, supported by more projects securing financial backing and increasing interest from institutional investors.”

Top names such as VC giant Andreessen Horowitz (a16z) raised secured one of the largest financing in crypto last year at $4.5 billion. A16z announced that they would distribute the capital across blockchain and crypto startups and would also invest in digital assets during the broader bear market.

Other significant investments during the last year include Immutable’s $500 million developer and venture investment fund, Fireblock’s $550 million in financing, and Consensys’ $450 million funding round.

David Pakman, managing partner at crypto VC firm CoinFund said that VC firms are still interested in crypto. Just that they are taking more time to do due diligence. VC firms are now demanding stronger investor protection rules. Pakman said that the valuations in the crypto space are also becoming more realistic.

Robert Le, a crypto analyst at the research firm PitchBook expects VC investments to pick up during the summer of 2023. This is because crypto funds now have the obligation to deploy the massive capital they raised during the bull market of 2021. “It’s not going to remain low forever,” he said.