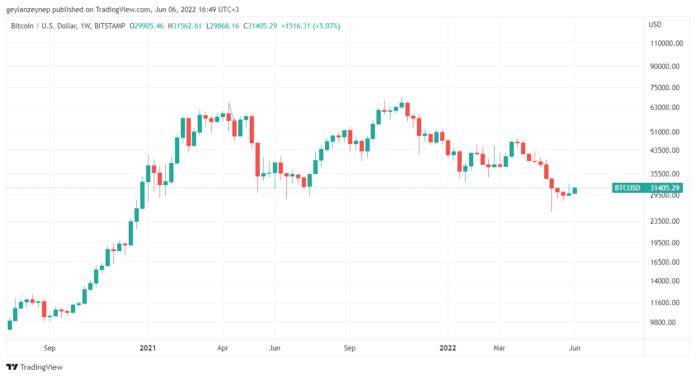 Could the ‘green trend’ continue?

The price increase also marks the breaking of the $30k resistance for Bitcoin for the second time in the past two weeks. The price had previously jumped to almost $32k in late May before crashing below the $30k mark.

Miners choose to sell off amid the price uptrend

Bitcoin miners started to sell their holdings during the most recent market downturn, which is unusual as they tend to hold and wait for the bear market to sell.

Despite the recent uptrend in Bitcoin prices, the sales didn’t stop. This could suggest that miners assume the price to be temporary and expect  Bitcoin to fall further.

However, the tendency to sell can also be perceived as a cautionary approach to the macro environment, as it is also a prudent move to keep mining operations going.

“There may be concerns of this selling activity causing downward pressure on Bitcoin’s price. The reality is, though, that while some miners do have decently-sized Bitcoin holdings, the amount they trade on a daily basis is negligible relative to the total amount of Bitcoin volume. Currently being less than 1% of the total volume traded.”

“In addition, total variation of Miner Reserves have not been much in the last month. A total of 7,469.53 BTC were sold from the initial amount at the beginning of the month.”

Still bullish in the long run

Bloomberg Intelligence’s senior commodity strategist Mike McGlone talked about the market at the end of last week, noting that the current market reflects the most significant inflation in 40 years, the first in most people’s lifetime. However, he also said that once this period is over, Bitcoin will soar and become the best asset to hold in the world.

McGlone said both Bitcoin and S&P 500 returned to their 100-week mean at the end of May for the first time in two years. Nasdaq broke one of its prominent supports as Bitcoin broke its $30,000 support. He argued that the market uptrend would begin when one of these indicators finds its foundation and turn upwards. He anticipated that to be Bitcoin itself, which he believes could reach a value of $100k by 2025.

Regardless of the volatility in Bitcoin prices, McGlone said one Bitcoin would cost around $100k in 2025 and likened Bitcoin to the early years of Amazon and Gold, which all showed similar volatilities during their establishment periods before they became solid risk-off assets.

Bitcoin Price Soars This ‘Uptober’ As BTC Barrels Past $20,000

XRP Chills About Support And Aims Higher, Will It Breach $0.5?

XRP Chills About Support And Aims Higher, Will It Breach $0.5?

Ethereum Bulls Won’t Like What These On-Chain Metrics Suggest

What’s Going On With Ethereum’s MEV-Boost?